Soccer is one of the most popular sports globally, with a huge following represented by billions of fans.

It turns out, playing soccer is almost as popular as watching soccer. According to FIFA, the Fédération Internationale de Football Association, there are more than 240 million players worldwide. The United States is one of the top soccer-playing country’s, with nearly 18 million players. 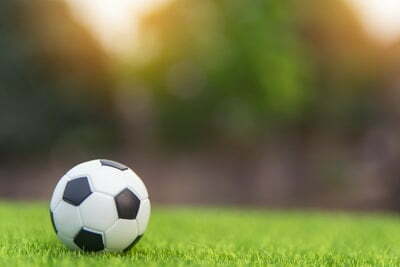 This sport is exciting and caters to all age groups. Interested in knowing more about the game? This article is the perfect beginner’s guide to soccer and includes the basic rules of soccer and information on the players and their equipment!

Before explaining how to play soccer, it’s important to outline the purpose of the game. To win a soccer game, one team has to score more points than their opposing team. Teams win points for scoring goals.

Goals are stationed at either end of the field and positioned on a “goal line.” The goal frame consists of two goal posts and a crossbar. Connected to each frame is a net meant to stop the ball after being kicked into the goal.

For a goal to count, the ball must be kicked past the goal line and into the goal frame.

A standard soccer game lasts 90 minutes. These 90 minutes split into two 45 minute sessions, with a 15-minute break for half-time. Youth and high school teams may play for shorter periods.

Time may be added to a game to make up for time lost due to substitutions, injuries, or fouls.

Each team can have 11 players on the field, one of which is the goalie.

One of the well-known soccer rules is that no player can use their hands. This doesn’t apply to the goalie whose job it is to keep the opposing team from scoring. The rest of the team plays either defensive or offensive positions.

Each soccer game also has a referee. Referees make sure that teams are playing fairly and abide by the rules of soccer.

Every soccer player wears a uniform, consisting of a jersey and shorts. They also wear shin guards to protect them from injury. The most important thing for every player to have is firm ground (grass) soccer cleats.

Goalies may have extra equipment, such as special gloves that help them catch the ball.

Other Basic Rules of Soccer

Every game starts with a coin toss between the team captains. The winner of the coin toss gets to decide which goal their team will defend.

When a ball goes out of bounds, the team that didn’t touch it last gets to throw in.

Lastly, teams may receive fouls for game misconduct. This includes: handling the ball, kicking, tripping, or tackling an opponent, dangerous play, unsportsmanlike conduct, or a disregard for the game’s rules. The referee monitors these.

Hopefully, after reading this article, you have a better understanding of the basic rules of soccer. Whether you’re a player or a fan, this sport provides a thrilling experience for every participant.

Check out our site to continue learning about soccer, as well as other sports!